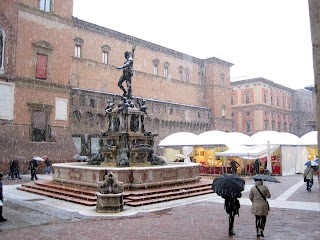 The flurries arrived in Bologna as stands were filled to the brim with chocolate at the 2010 Cioccoshow. Despite the cold, the fair went on. Several piazzas and small streets throughout the city were bustling with chocolate lovers meandering from stand to stand. Chocolatiers from various regions in Italy patiently waited, bundled up from head to toe, as customers strolled by searching for their choice. All shapes, sizes and varieties of chocolate were scattered all through the market. Soccer balls, Santas, tool sets, syrups, and all different types of chocolate filled the air with the sweet confections.
One particularly interesting stand offered chocolate kebabs and chocolate bark with hot peppers inside. Noticing my confusion, a man nearby informed me that the southern regions of Italy tend to use peppers in a large variety of ways, somewhat unlike northern Italy. Apparently, including chocolate.
Each of the stands had a uniform sign displaying the name and region from which they came. A trend of similar choices at the stands from neighboring regions was interesting. Each had their own methods and variety of offerings.
“There is a stand at the Cioccoshow from San Francisco,” said Liz Olive, a student studying abroad from the United States.
Just then she realized that she had, in fact, passed Pasticceria San Francesco, one of the stands from southern Italy, not a chocolatier from the United States. She chuckled at herself for a moment as she made her way to another stand to try some rich, melted chocolate, more commonly known as hot chocolate. 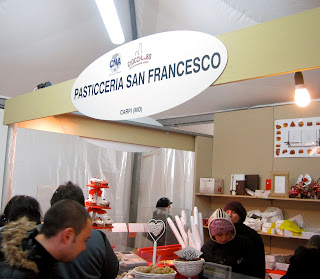 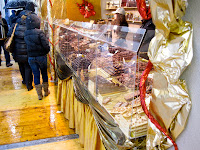 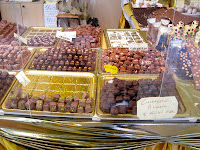 More details about the fair can be found at: http://www.cioccoshow.it/index.php
﻿JM
Published by Julia

I think I'm going to cry... I miss it so much. Thanks for the pictures!