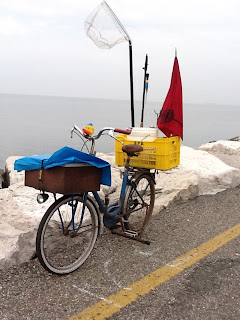 Yesterday Saturday, we went to the beach (no, the photo above is not from yesterday as I did not take a camera). We went to nearby Marina di Ravenna on the Adriatic coast and it was sunny and quite hot (30°C/86°F). The beaches were full with people enjoying a nice day at the beach.

Then I read the news: people have cancelled their trips to Italy due to the recent earthquakes even if they were NOT travelling near Modena and Ferrara. That is like saying you won't travel to Oregon because there was an earthquake in California or that you won't go to Ireland because Scotland had an earthquake. These towns are NEAR Bologna but it is NOT Bologna. I have no idea how the foreign media has reported this particular disaster but please rest assured that the rest of Italy is still functioning well.

The roads in and around the Emilia Romagna region are clear (so yes, you can travel to the beach or other towns or resorts) and telephone lines, internet are working as is everything else. The areas that were hard hit are between Modena and Ferrara.

Because of the disaster, it is logical to avoid going to Finale Emilia, Mirandola and the other numerous towns hit by the earthquake in the next 2 or so months. It doesn't make sense to visit because local resources are being used to get the towns, its people and businesses back up on their feet again.

But the rest of the region and country are working well despite how bad we feel for our fellow countrymen and women.

I look forward to seeing all of you in Bologna...whether you take a cooking class with me or are just eating your way through Bologna (who can blame you!).