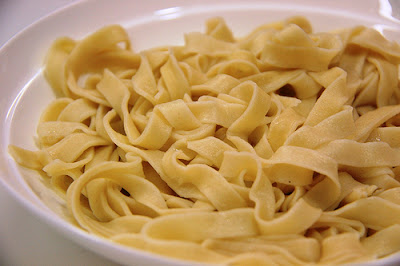 What do blond hair and Tagliatelle noodles pasta have in common? More than you think!

It is said that the tagliatelle was invented in the Fifteenth Century for the matrimony of Annibale II Bentivoglio and Lucrezia Borgia. Apparently the chef was inspired by the bride’s golden hair and created the “tagliatelle” noodles to honor her.

Though the credibility of this legend is dubious (as tagliatelle was likely invented earlier), the legend shows the importance of food within the history of the Italian culture and the pride that many Italians have in their cuisine.

Bologna is well-known throughout Europe for being one of the gastronomic centers of Italy, and is famous for its fresh made pastas. Tagliatelle, a hand-rolled fresh pasta, is one of the types typical of Bologna. The pasta is thin, flat, and has a rough surface, which is obtained when the dough is rolled out on a rough wooden surface.

It is generally served al ragù, in a meat sauce referred to in English simply as Bolognese.  The rough surface of the pasta allows a heavier sauce to cling to it, instead of collecting at the bottom of the plate (Italians think that Americans are crazy for serving ragù with spaghetti because it does the opposite!).

by D.R. (intern @ Taste of Italy)
Published by Maribelous No comments: 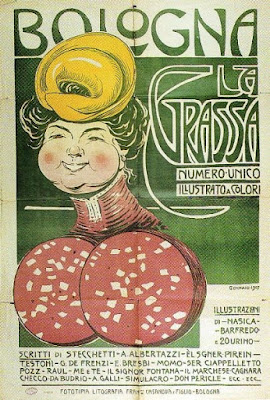 Ever since the Middle Ages, Bologna has been referred to as “la grassa,” which literally means “the fat.”  This moniker is a reference to the rich food culture in Bologna, which was already famous throughout Europe as far back as the 1300s, perhaps even further.

“Grassa,” of course, is not a reference to the fat content of the food here, but instead the abundance, variety, and high quality of the cuisine.  In the Middle Ages, this was quite the compliment for any city, since the richness of the food culture suggested all-around economic prosperity.

The culinary culture is tied quite strongly to the University of Bologna, the Alma Mater Studiorum.  Because of the Studiorum and its centrality within the culture of the city, Bologna is also referred to as “la dotta,” or “the learned.”  This famous university, founded in 1088, has long attracted illustrious students to Bologna from all over the world.

During the Middle Ages, a student had to come from a rich family to attend university, and many students from around Europe brought with them scores of servants, among them cooks.  As a result of these foreign cooks and their different methods of cooking, Bolognese cuisine gradually took on a new flavor, incorporating elements from nearby European cultures.

Without the prestigious university, Bolognese cuisine would not have developed as strongly as it did, and without the rich culinary tradition, the university would not have become so well renowned.  In this city, education and cuisine are locked together in a symbiotic relationship that has been in place for a millennium and still remains strong today.

by D.R.
Published by Maribelous No comments: