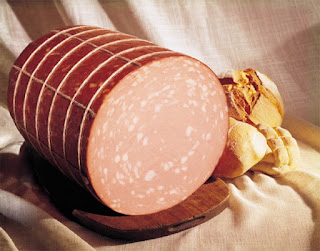 Mortadella, the real Italian Bologna sausage, originates right here in Bologna! Home to the Taste of Italy.
The hearty, yet surprisingly healthy sausage has been made in the area for nearly 500 years, but has very little resemblance to the packaged, thick slices in the grocery store. Mortadella makers, using the traditional Italian style - leaving nothing to waste, use fat and spices to pack the thinly sliced delicacy with flavor. Often times the additions can literally be seen in the finished product. Though fat is used in the product, mortadella is relatively low fat. Only the tastiest fats are added into the sausage for the burst of flavor.
Bologna, the city is better known as 'la grassa' or 'the fat' leaves nothing to the imagination when it comes to taste and enjoyment in the dining department. Like the Parmigiano-Reggiano and Traditional Balsamic Vinegar, the sausage must pass criteria to be the official Mortadella di Bologna. The genuine product is protected by PGI (Protected Geographical Indication). This means the products are free from fillers, artificial colors, flavors and preservatives.
Mortadella is a must-try when wandering the small streets of the city. Appetizers with mortadella, sometimes with other meats are generally accompanied by some type of cheese which make great pallate pleasers before the meal. Yum!
Oh, and just in case you were curious, the Oscar Mayer jingle is no longer used. The company wanted other products to be represented as well. I wonder what will happen to its Bologna sausage? One thing I am sure of, mortadella, the original Bologna sausage isn't going anywhere!
You can find more information about Mortadella at the following:
http://www.lifeinitaly.com/food/Mortadella.asp
http://www.mortadellabologna.com/index.html
J.M.
Published by Julia